Skiddaw dominates the landscape in the popular area of the Northern Lake District around Keswick, and is the fourth highest mountain in England after Scafell Pike, Scafell and Helvellyn. Given its size it is generally regarded as one of the easiest climbs of the larger Wainwright fells, and given its position near to bustling Keswick, it is a very popular mountain indeed. It is a particularly beautiful sight, and it is easy to see why Wainwright himself was deeply enamoured by its 'smooth lines and graceful curves'.

Because Skiddaw itself if not a particularly difficult climb, it is possible to complete a number of fells from your Wainwright map in a day's walking. One ridge including Skiddaw takes in the Wainwright fells of Bakestall, Skiddaw Little Man, Latrigg and Lonscale Fell. The easiest route of all begins in Keswick and ascends Latrigg, continuing over the sloping Skiddaw Little Man and on to the top. From here, excellent views can be taken in, stretching as far as the Southern Uplands in Scotland, the Cheviots, Northern Pennines and the Solway, as well as great views over neighbouring Lake District mountains. On clear days, amazingly, views can stretch as far as Goat Fell on the Isle of Arran, the Isle of Man and the Mourne Mountains. Given this is the case, it is easy to see why Skiddaw is one of the most popular Wainwright walks of all.

The route recommended by Wainwright travels the route along Longside Edge, starting at Carl Side and followed by Long Side and Ullock Pike before a steep climb to the peak of Skiddaw via Carlside Col. A great day's walking can be had following this Wainwright Walk, taking in stunning scenery and completing four peaks from your Wainwright Maps at once.

More information on Skiddaw and the nearby Wainwright Fells can be discovered in Book Five: The Northern Fells by Alfred Wainwright, part of the Pictorial Guide to the Lakeland Fells. 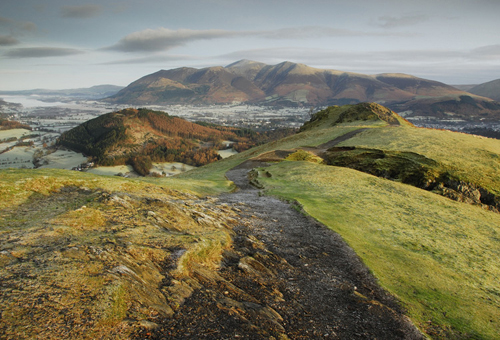 A dusting of snow caps Skiddaw, viewed from another of the Wainwrights, Cat Bells - Picture by Stewart Smith Photography