Great Gable lies in the very heart of the Lake District National Park along with its lesser companion Green Gable. Both stand with footings at the end of Ennerdale and Wasdale. Not surprisingly due to its central location, Gable is a very popular Wainwright walk indeed offering spectacular panoramic views of all the major hills in the Lake District.

From the summit you can enjoy views down Wasdale towards Lingmell and Wastwater, with Illgill Head and Whin Rigg rising from its shores in the South and Buckbarrow, Middle Fell and Yewbarrow in the North. Views towards the south take in Lingmell and the fifth highest Wainwright fell Great End as they rise swiftly from Wasdale. The Sca Fell range offers a dominating backdrop here as their huge mass fills the skyline.

Great Gable has many approaches to the summit, the most popular being from Honister Pass, this route is slightly less demanding than other approaches but still provides the wainwright walker with a challenging day out in the Lake District. The route from Honister Pass takes a direct route towards the summit bypassing Green Gable along the way, once the summit of Great Gable is reached you can decend by completing a further three Wainwright fells, Green Gable, Brandreth and Grey Knott all in the same outing.

Every year 500 or so people converge on the summit of Great Gable to remember the members of the Fell and Rock Climbng Club who fell during the First World War, there is a plaque mounted in the summit rock commemorating those who died. This has become a popular annual ceremony since the summit plaque dedication by Geoffrey Winthrop Young in 1924. Avid Lake District walkers attend the ceremony every year on remembrance sunday come rain or shine. A speech is made by a member of the Fell and Rock Climbng Club followed by a two minute silence, this is quite an experience on the seventh largest Wainwright fell. 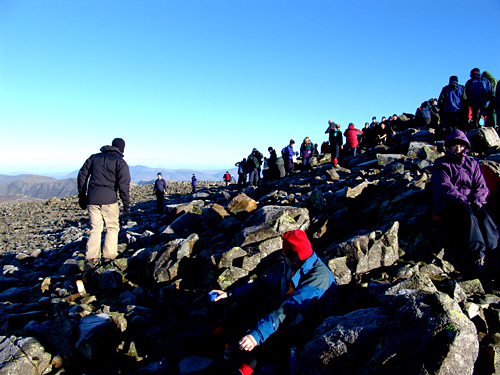 Every year Climbers and walkers converge on the Summit of Great Gable for remembrance Sunday.
Photograph by Jack Towers 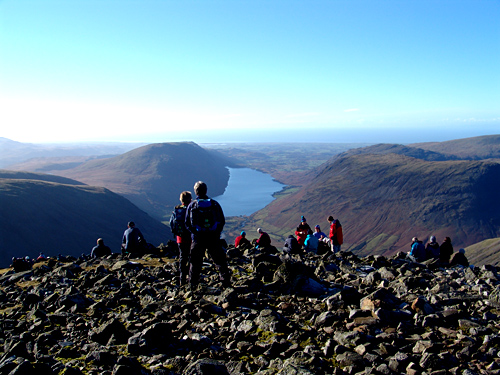