Middle Fell is one of Wainwright's western fells, a satellite of the larger Wainwright hill, Seatallen. It is most commonly climbed from Greendale on the shores of Wastwater, giving great views of the lake and the screes that drop sharply to the water from Whin Rigg and Illgill Head on the other side of Wasdale. Wainwright Walks to Middle Fell from Greendale either follow a direct route up the ridge to the summit, or a lengthier route via Greendale Tarn. The latter route gives excellent views of Seatallen with the tarn in the valley below.

At the summit of Middle Fell, apart from the excellent Wastwater views, the Scafell group is well seen, as are the distant Coniston fells to the South East. The roughly similar sized Black Combe, one of Wainwright's outlying fells, can be seen near the Irish Sea coast to the South West. Perhaps the main reason for a Wainwright walk to Middle Fell is the spectacular view of Wastwater, which feels wild and remote, sometimes ominous but always spectacular.

More information on Middle Fell and the Wainwright Fells around Wasdale can been found in Book Seven, The Western Fells, by Alfred Wainwright, a volume of the Pictorial Guide to the Lakeland Fells. 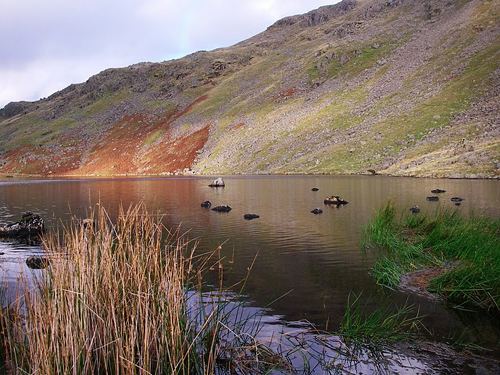