Naturally, given that it is the highest point in the Lake District and in England, Scafell Pike is a very popular walk to complete on our Wainwright Maps. Scafell Pike has four main routes to the summit, all of which are long given its height, but which offer different levels of difficulty. The most popular Wainwright Walk to Scafell Pike begins at Wasdale Head at the north of Wastwater, which provides a long but straightforward hike to the top. The most difficult ascent, but one which A. Wainwright would agree has superior scenery and views, can be made from Eskdale, following the route of the River Esk before ascending steeply up to Mickledore.

Ideal for walkers wanting to complete fells on one of our Wainwright Maps, the taxing route from Borrowdale gives the advantage of access to Scafell and Scafell Pike, with a return route than can take in any or all of the Wainwright fells, Glaramara, Allen Crags and Great End - meaning 5 peaks can be ticked off in a day for walkers who are feeling energetic! A final route ideal for people wishing to complete as many as possible of the fells described in Wainwright's guides begins in Langdale, reaching the top by way of Rossett Gill and Esk Hause. The return route can be varied, either to take in the Wainwright fells Esk Pike and Bowfell, or alternatively via Rossett Pike. If you are completing fells from our Wainwright Maps, Scafell Pike and Scafell offer a great opportunity to get off to a good start and see several in one swoop.

Being the highest in the Lake District, Scafell Pike naturally enough offers a stunning panorama from its summit, taking in the whole of the Lake District. Wastwater, Derwent Water and Windermere can be seen glimmering between the surrounding peaks on clear days, along with many of the Wainwright fells including Skiddaw, Great Gable, High Raise, Helvellyn and Blencathra - in fact, it is the perfect place from which to plan more walks to complete on your Wainwright map.

More information on routes to Scafell Pike and the surrounding Wainwright fells can be found in Book Four: The Southern Fells by Alfred Wainwright, part of the Pictorial Guide to the Lakeland Fells. 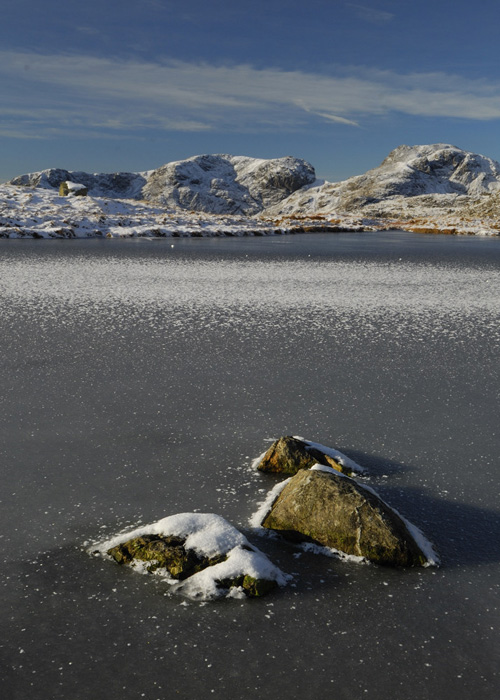