Birks is a Wainwright hill not far from the village of Patterdale, in Wainwright's Eastern Fells to the south of Ullswater. It is the centre of a ridge of fells that includes the Wainwright peaks Arnison Crag to the North East and the much larger St. Sunday Crag to the South West. Despite its modest size, its position between Grisedale and Deepdale at the end of Ullswater offers excellent views of the lake and the fells which flank its shores.

Wainwright walks to the summit of Birks are usually carried out from the Patterdale valley, with most Wainwright walkers choosing to include either Arnison Crag on the way up or continue on to St. Sunday Crag, or both. Including Birks on a long circular walk from Patterdale is also possible, taking in a number of peaks on your Wainwright Fell Maps, which after Arnison Crag, Birks and St. Sunday Crag, continues on to the even higher Fairfield, Dollywaggon Pike, Nethermost Pike, Helvellyn and White Side, before returning to the starting point via Glenridding Common. This extensive hike completes eight fells from a Wainwright Hill Chart, and is notable as it includes five of the twenty highest Wainwright fells in the Lake District.

A Wainwright walk to Birks is most impressive for its views of the picturesque Ullswater, while the Helvellyn ridge is also dominant from the summit. To the East, the High Raise and High Street fell groups can be seen. Birks is a Wainwright fell with the advantage of being relatively easy to climb, with good views from its modest top, while also being one of the Wainwrights that can be included on longer walks by hikers looking to climb a number of peaks on their Wainwright maps.

Further detail on Birks and the fells nearby can be read about in Book One, The Eastern Fells, by Alfred Wainwright, a volume of the Pictorial Guide to the Lakeland Fells. 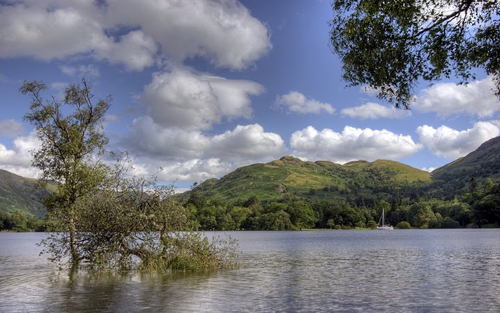 The Wainwright fell of Birks, viewed from the shores of Ullswater. Photograph by Ammonyte.