Red Screes is a Wainwright Hill in the Eastern Fells, commonly seen from the Kirkstone Pass that links Patterdale and Windermere, with particularly fine views from the Kirkstone Inn that features on that route. Its summit gives excellent views down Patterdale to the tip of Ullswater, with equally clear views of Brotherswater and the fells that flank it. While a Wainwright Walk to Red Screes also gives hikers the opportunity to witness a packed panorama that includes the Southern and Far Eastern Fells, the High Street range and Scafell Pike in the distance. Understandably given its name, Alfred Wainwright's notes on this fell included that it had the reddest screes in the Lake District. Clearly the famous walker, illustrator and writer spent some time on Red Screes, establishing in his guidebooks that the fell's tarn and pools played host to the highest population of tadpoles of any Wainwright Fell. Quite how this was established is one to ponder while completing a Wainwright walk to the summit.

The obvious and most direct route to the large cairn at the top can be achieved from the Kirkstone Pass itself, taking a clear path which climbs very rapidly and includes some scrambling making it an entertaining, if vigorous short climb to this Wainwright Fell. Other routes for a Wainwright walk include a number that begin in Ambleside, taking paths through Scandale or Stock Ghyll. Those intent of completing fells from their Wainwright Hill Maps will surely want to include Middle Dodd - which is a subsidiary summit of Red Screes, and can be ticked off your Wainwright Fells Maps with a relatively small amount of extra effort once you have reached Red Screes. Other walks that take in more than one of the Wainwright's can take in Middle Dodd, Little Hart Crag and High Hartsop Dodd in a route from the south of the Kirkstone Pass to the shores of Brotherswater.

Greater detail on Red Screes and nearby Wainwright Walks can be found in Book One: The Eastern Fells, by A. Wainwright, a volume of the Pictorial Guide to the Lakeland Fells. 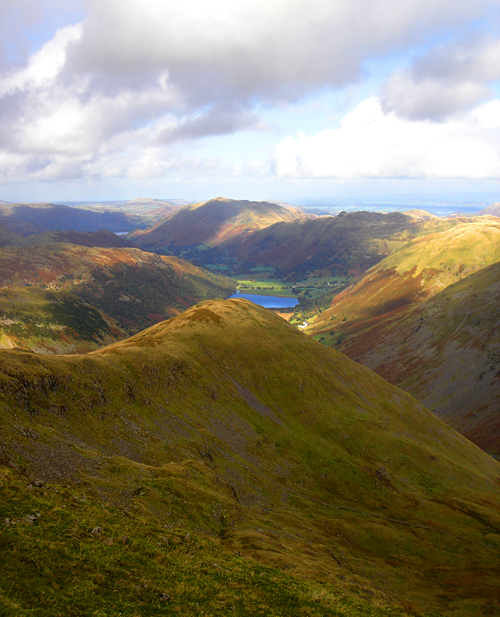 View from the top of Red Screes, looking north into Patterdale. The Wainwright Fell of Middle Dodd is in the foreground. Photograph by Jack Towers.